Heard about antenna tuning but couldn't get past the mathematics behind it? Here is a quick and practical guide on how to go along with antenna tuning for your own IoT device.

What is antenna tuning?

Why tune an antenna?

Antenna is probably the most important part of a wireless system, as it is responsible for sending and receiving the data on the physical layer. A properly tuned antenna can help in many ways. It can increase the working range and can also help in reducing the power consumption of wireless device.

These are the most commonly used and heard terms when doing antenna tuning. VSWR stands for Voltage Standing Wave Ratio. It is a function of the reflection coefficient, which describes the power reflected back from the antenna. The reflection coefficient is known as s11 or return loss. The VSWR is always a real and positive number for antennas. The smaller the VSWR is, the better the antenna is matched to the transmission line and the more power is delivered to the antenna. The minimum VSWR is 1.0. In this case, no power is reflected from the antenna, which is ideal. In general, if the VSWR is under 2 the antenna match is considered very good and little would be gained by impedance matching.

As can be seen from the table, VSWR of 2 corresponds to 11.1% of reflected power. This means that to the antenna, 89.9% of power is transmitted.  VSWR of 1.5 will increase this transmitted power to 96%, which isn't very big jump. Therefore, reducing the VSWR from 2 to 1.8-1.7 won't bring in much improvements to your antenna tuning.

Whip antennas are simple in construction and are readily available in market. They are Omnidirectional except for along the length of the antenna (Donut Shaped Radiation Pattern). These are usually very efficient and are available with simple Plug and use standard connector (SMA, U.FL). Their major disadvantage is Size and therefore these are not suitable to put inside a box. 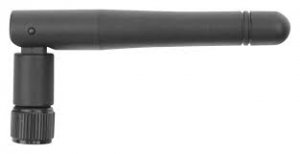 Dipole antennas are simple in construction and don't require any additional ground plane. Their radiation pattern is similar to Whip Antennas, Omnidirectional except for along the length of the dipole (Donut Shaped).  Various modifications exist of dipole antennas, Half-wave, Monopole, Folded Dipole, Short Dipole and so on. Their major disadvantage is also their size.

PCB Antennas are small and compact. They do not require any matching components as the matching is done by changing the length of the antenna.  They are mainly used where there is space constraint, for example, inside Mobile Phones. Their major disadvantage is that these are not as efficient as Dipole antenna. Another thing to keep in mind is that the antenna may have to be tuned again, if any changes are made on the PCB. For example, the antenna tuning may go off, if the laminate, or PCB thickness, PCB material or some other components is changed. 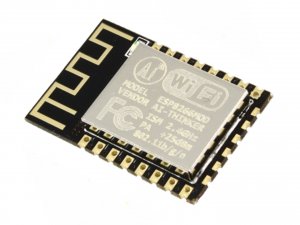 These are very small and compact. They also are almost Omnidirectional in nature. They typically require a ground plane. Their Input Impedance varies and thus matching is required in almost all cases. Their major disadvantage is that they are not as efficient as Dipole Antennas. In almost all the cases these need proper tuning with a matching circuit and matching components introduce additional loss. 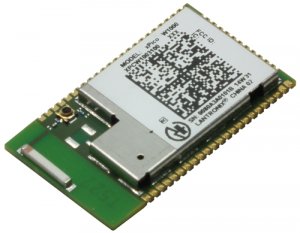 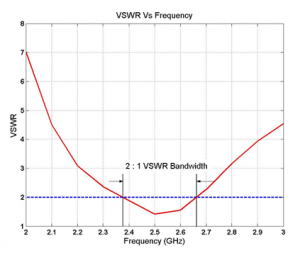 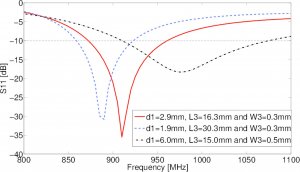 An antenna with high directivity will provide better range and performance but in one specific direction only. An isotropic antenna (Omnidirectional) will have to compromise on range.

For example in this radiation pattern, the major portion of radiation will be along the Main and back lobe, but there will be very small radiation along the Side lobes. 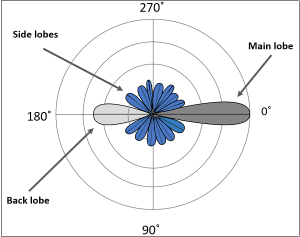 How the antenna will be connected to the PCB will depend upon the Connector Type. Most antenna choices are available with SMA and U.FL connectors. The Connector also depends on space available on PCB. 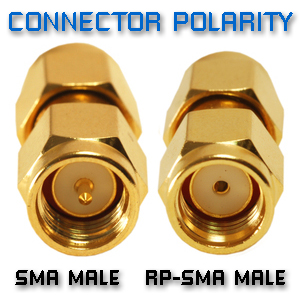 There are lots of different VNA’s available in the market but they are usually very costly. The VNA that we used is called ‘miniVNA’ and is fairly economical compared to others. It is a USB based VNA, with no display and thus has to be connected to a  computer to view the results. 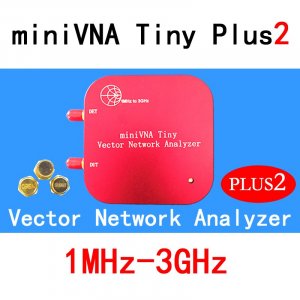 Here is a link to buy it from aliexpress: miniVNA Aliexpress

A calibration kit is used to calibrate a VNA and has 3 connectors, short, open and 50 ohm impedance. It has to bought externally if not supplied with the VNA. The MiniVNA has these included inside the box.

For tuning the antenna, matching components (inductors and capacitors) of various different values will be required . While buying these components, make sure that their ESR rating is less. Lower the ESR, lower is the stray inductive and capacitive effects.

Here is a Bill Of Materials (BOM) of different valued components that we bought from lcsc.com : BOM

This can be uploaded directly at their website for quick buy. 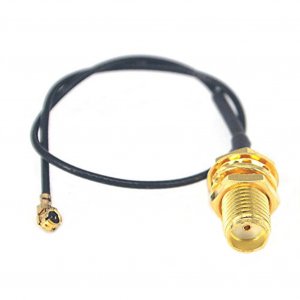 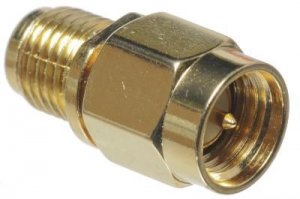 Software for VNA and calibration

The software for VNA will depend upon the VNA being used. Please refer to the specific VNA's website for more information.

Smith Chart is a tool to visualise the complex impedance of an antenna as a function of frequency. These are extremely helpful for impedance matching. It is used to display an actual (physical) antenna's impedance when measured on a Vector Network Analyzer (VNA). The value of matching components can be calculated very easily using a Smith Chart. 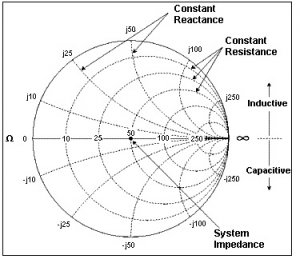 A software is available for plotting Smith Chart and calculating components values: https://www.w0qe.com/SimSmith.html

How to tune antenna:

This section will give a practical idea on how to go along with the antenna tuning. With each step there is a Use Case, which describes how we did it to tune our antenna.

The very first step of antenna tuning is VNA calibration. VNA Calibration or Vector error correction is the process of characterising the systematic errors of the network analyser system by measuring known devices called calibration standards. Subsequently, the effects of the characterised systematic errors are mathematically removed from raw measurements. Calibration should be done as close as possible to the point of interest. Long cables in between the VNA and the DUT (Device Under Test) can add phase delays which will give wrong measurements.

How to do VNA calibration on PCB

To check an antenna which is not mounted on to the PCB, the VNA calibration can be done directly with the help of the calibration kit. Refer to your specific VNA documentation on how to calibrate the VNA. However, to check an antenna mounted on PCB, the calibration has to be done with the PCB itself. This is because the feedline will actually form a part of the transmission line feeding the antenna. Therefore, it also needs to be taken into account. For the calibration, take a good quality small length coaxial cable and solder the cable on the PCB as shown in the image. The cable should be soldered just before the point where feedline starts. 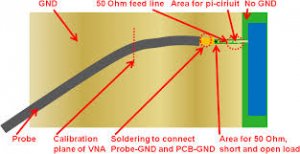 Keeping the above points in mind, we prepared our own PCB for calibration.

Once the calibration is done, you can start with the antenna measurement. Connect the VNA with the antenna, without any matching components. If the antenna needs to be inside a box, put it inside the box and mount it like it has to be in final version. Check the Return Loss and VSWR in the frequency range of interest. Anything below -10 dB return loss/VSWR < 2:1 is good enough. There will be no major benefit of going from -10 dB to -20 dB.

If the antenna response in the desired frequency range is already below -10dB, the antenna is tuned. If not, then proceed further on how to tune.

We tested our antenna without any matching component, with the calibration generated above. These were the results. 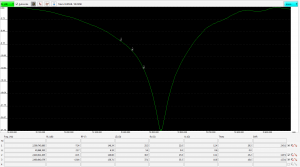 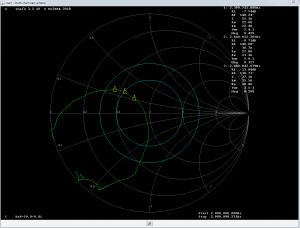 As can be seen the return loss ‘dip’ is somewhere around 2.5 GHz but the required frequency range was 2.4 GHz ISM band.

Decide which point to tune

In our application,  the point of interest was set to 2440 MHz, as the required frequency range was 2.4 GHz ISM band. The goal was set to bring point ‘2’ (2440 MHz) in the above graphs as close as possible to the centre of the Smith Chart.

To find out the matching components and to calculate their values, a little knowledge about how points shift on a Smith Chart is required. A very basic and practical approach is shown here, to know more on Smith Chart, please check the article here: 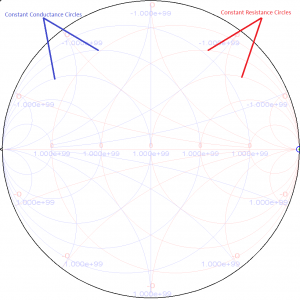 How Points Move on Smith Chart

To move a point along the specific paths, a matching component is required (inductor or capacitor).

A series inductor will shift the point in clockwise direction along the Constant Resistance Circle. 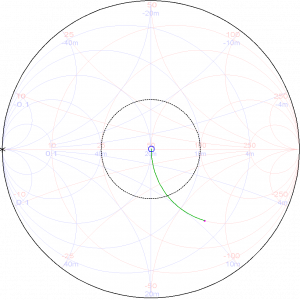 A series capacitor will shift the point in anticlockwise direction along the Constant Resistance Circle. 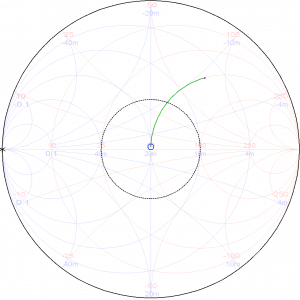 A parallel inductor will move a point in counter clockwise direction along the constant conductance circle. 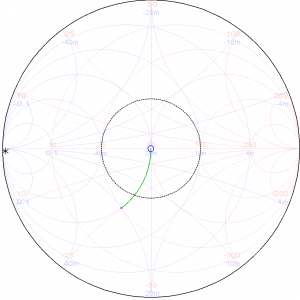 A parallel capacitor will move a point in clockwise direction along the constant conductance circle. 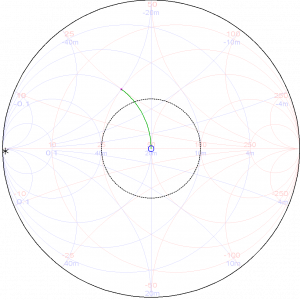 Using the SimSmith tool, matching components values were calculated. We decided to use a L circuit, as only one component was not enough to bring the point ‘2’ (2440 MHz) to the centre.

The matching component values calculated were: 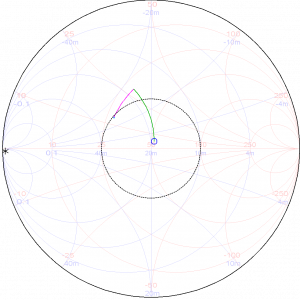 Using the above calculated components value, do the antenna measurement again. If the frequency of interest seems to be well below -10dB, tuning is done.

With the above calculated values, the measurements were taken again. The result obtained was pretty close to the theoretical calculation although not exact. The antenna seemed to be tuned very well for 2.4 GHz ISM band, but our requirement was to get the higher frequency range better. 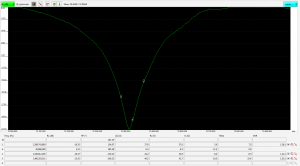 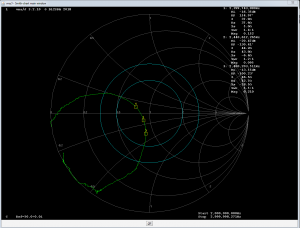 Repeat above steps till the required point is matched properly

The initial tuning seemed fine, but our requirement was to get the upper frequency ranges better. The component calculations were done again, this time trying to get the point ‘3’ (2480 MHz) as close as possible to the centre of Smith Chart.

The results obtained were this 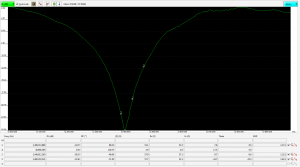 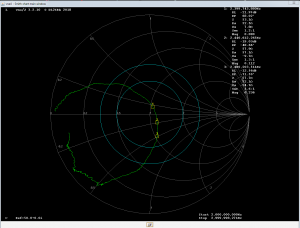 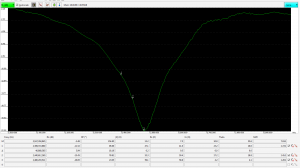 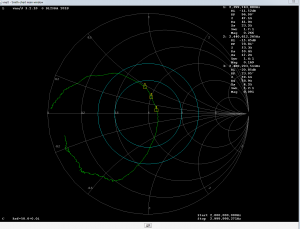 Test the device with the tuned antenna

When it seems that the antenna is tuned, test the device in real life scenario.

With the antenna tuned, we decided to test it in real conditions. Before tuning, the antenna worked over a very short range (~10 meters). With the tuning done, the range was increased and so was the transmission speeds. The device is now able to transmit big chunks of data from even 2 floors up with concrete ceilings and walls in between reliably. In open area, we were able to achieve over 90 m (295 feet) of direct line-of-sight range which is pretty good considering an Omnidirectional antenna on a battery powered device working at 2 Mbps on air data rate.

That's it! A very basic introduction to antenna tuning. We hope you learned something from this article.

Please let us know how we did in the comment section below.